July 12, 2017: Historic #NetNeutrality day of action swept the Internet broke records with millions of comments to FCC and emails to lawmakers

A couple weeks ago, on September 30, the NEH sponsored “Play/back,” a symposium on audiovisual preservation. As one of the planners of the event, I put together a panel of archivists and scholars who talked about collection building. Originally created around the theme of “Appraising Our Audiovisual Heritage,” the panel discussed various projects that have created or identified materials that are of use to humanities-focused inquiry, including community representation, oral history, documentation, jazz history, and new modes of analysis. Here’s a lightly edited version of my introduction to the panel:

Let me begin by telling you a bit more about the spirit and ideas that frame this session. We are all here because we care about addressing the many hurdles remain in our race to steward and ensure meaningful access to audiovisual cultural heritage resources. I’m sure many of you are familiar with some of the major challenges: Many reports from the cultural heritage sector have focused attention on the physical degradation of legacy audio and moving image recordings; much playback equipment may be nearing the end of usable life and replacement parts are difficult to come by; and needs remain to convey the knowledge and skills and educate new professionals in transferring legacy media. The large amount of recorded material on at-risk analog formats, and the growing amounts created and preserved digitally, may exceed the resources available to manage this content for the long term, which suggests that we face pressing issues about selecting content to be preserved; these choices will carry critical consequences for the cultural heritage community. At the International Association of Sound and Audiovisual Archives meeting, held at the Library of Congress earlier this week, Will Prentice from the British Library voiced this issue when he asked: “If we carry on with business as usual, will we be able to save our audio and moving image collections?”

Humanists and others must lend their voices to the preservation conversation, particularly to inform the choices around selection of audio recordings for preservation, rather than leaving the issue to benign neglect or survival of the fittest.

In some ways akin to the “Brittle Books” crisis, in which NEH played a major part in the 1990s, the challenge of preserving audiovisual materials is complex. Many items are in unknown condition and are scattered among institutions. Some are held by public and private institutions, others by individual collectors. The combination of physical degradation and the absence of playback equipment has led some to declare that these materials must be reformatted in the near future, perhaps within a 10 to 15 year time horizon, or risk being permanently lost. In the 1990s, as the preservation community feared the loss of millions of volumes to the “slow fire” of acidic paper, Patricia Battin, recipient of a 1999 Humanities Medal, suggested that humanists and others have an “obligation” to lend their voices to the conversation, particularly to inform the “difficult choices” around selection for preservation, rather than leaving the issue to benign neglect or survival of the fittest.

Such issues were among those that motivated NEH to sponsor this symposium. But our hope in this event is to look into meaningful actions that we are taking now, to spark productive collaboration, and to spur this cross-domain conversation: to bring together archivists, scholars, educators, and other humanists who have a stake in using and accessing audio and moving image resources, but may be isolated from the work of preservation. Humanists, including oral historians, anthropologists, musicologists, linguists, and folklorists, along with educators, students, and cultural producers, are often unaware of the technical challenges involved in preserving audiovisual materials. As more content is turned or created digital, the methods for effectively analyzing it, discovering it, and making use of it in research and teaching remain underdeveloped. YET, Humanists can articulate the value of audiovisual content for research, teaching, and other cultural heritage work; as a whole, humanities scholars need to become more fully engaged with the serious threat facing our audiovisual heritage. So we hope that what you learn today, and the connections you make here, will seed new conversations and foster further collaboration.

In this spirit of dialogue, we’re structuring our first panel session as a prepared conversation, which we hope leads to further discussions in the breakout sessions to follow. This session, titled “Appraising Audiovisual Heritage,” was designed around ideas theorized by archivists, that of determining whether and why items and collections resources should be sustained for the Long Term.

We hope that the ideas of the session serve as a starter for our cross-domain conversation. As it’s come together, I see that the panel will discuss ways of identifying the sorts of activities that audio and moving image materials support in humanities work, how they may be accessed and repurposed, and we hope, articulate the value of preserving content for these engaging modes in which we communicate human stories.

These were followed by four great presenters, who provided examples of their work:

Video and transcripts of these presentations are in production for the NEH website, so check there soon for more!

I’ve also posted an essay version of this medium.com titled “Play/back: The Challenge to Select in Audio Archives”.

Over at Bibliolore, they featured Moondog this week:

Louis T. Hardin, known to all as Moondog, was celebrated among New Yorkers for two decades as a mysterious and extravagantly clothed blind street performer; but he went on to win acclaim in Europe as an avant-garde composer, conducting orchestras before royalty.

From the late 1940s until the early 1970s Moondog stood like a sentinel on Avenue of the Americas near 54th Street. Rain or shine, he wore a homemade robe, sandals, a flowing cape, and a horned Viking helmet, and clutched a long homemade spear.

Remember those cabbage sprouts? They were “Mei Ching Choi” variety of bok choi (brassica rapa var. chinensis). They did well… about 100 days from planting, they’ve produced beautiful little bok choi heads. Delicious in a stir fry! Here’s how they looked on Wednesday – just a few days past prime (you can see they’re starting to bolt, i.e., send up flower stalks). 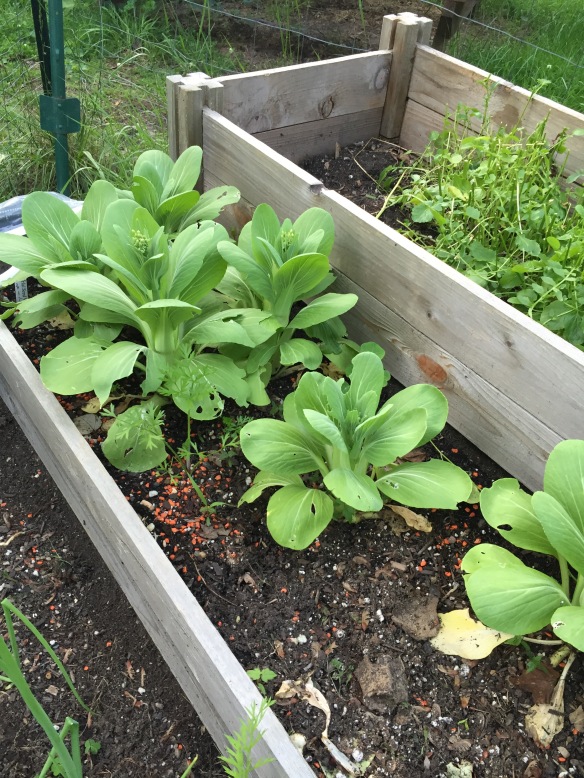 Looking around this morning, a lot is happening in the garden today! Here’s a few:

Above, the viburnum prunifolium (aka Black Haw) is in bloom, with parabolas of small white flowers.

In the garden, remember those bok choi seedlings? They’re starting to look like bok choi already! (They’re about 66 days from the seed planting.) I’m not using any insect deterrents yet, so let’s hope they don’t get too munched. But we think we’ll get enough to have some baby bok choi for a stir fry at least. 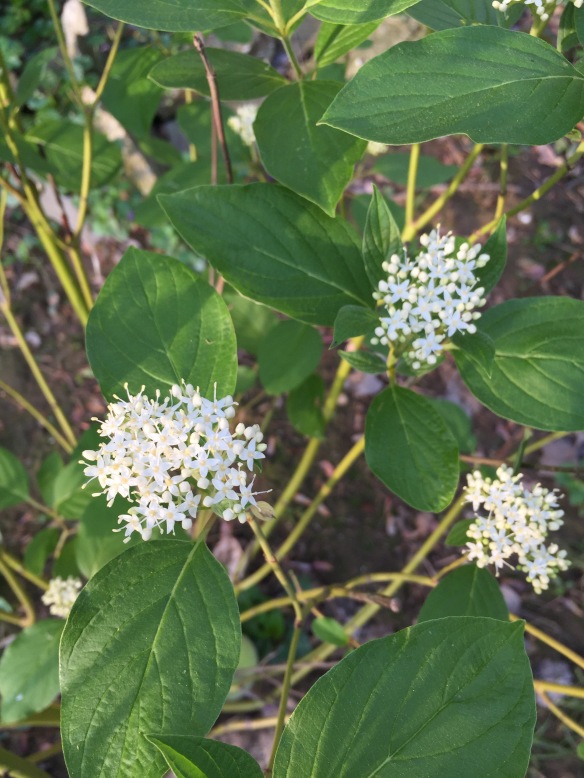 Here’s the blooms on the green twig dogwood (cornus sericea ‘cardinal’), which is having a great spring though it was only planted last year.

Finally, continuing the 2016 seed project, here’s the first leaves on the nasturtiums! I planted these about three weeks ago, so they’re a bit slow to germinate but I’m looking forward to their colorful blooms, if they grow quick enough to beat the summer heat.

We had the chance to go out in the woods last weekend. It’s definitely spring in the MidAtlantic region, and it’s a great time to see the woods leafing out for summer! We saw spicebush (lindera benzoin) in bloom, with its understated light yellow flowers. Though small, they do stand out when everything else is still gray and brown. If you look closely, there was a native bee or fly gathering food on one.

Later, we also saw some service berries in bloom (amelanchier canadensis, I suspect). They have larger, but still rather slight five-petaled white blossoms.

U. of Maryland Extension reported that spicebush was blooming in Ellicott City, Maryland on March 24 this year, which was just a few days before this sighting.

I didn’t have a chance to post pictures of the onions earlier. We’re planning to plant today. So before I post on that, here’s the onion sprouts. These are about 5 weeks from seed sowing, and the third leaf is now visible:

When seeds sprouts, the sproutlings will have one (monocots) or two (dicots) leaves. Most of the herbaceous plants and vegetable types in our yards and gardens are dicots, including the cabbages. These initial sprouts grow from the nutrients provide by the seed, activated by light and water. After a few days, these cotyledons will sprout their first set of “true” leaves. These will be shaped more like the mature leaves that the plant will develop (the cotyledons have a few shapes and are all quite small, cabbages have sort of heart shape).

This morning, day 10 of the cabbage sproutlings, I noticed the true leaves are budding. You can just see them at the node between the two first leaves.

(The onions are monocots so will have a single leaf. More on them later.)

After the first week, the cabbage sprouts are one to two inches tall. This is the “Mei Ching Choi” variety of Brassica rapa.

Some of them (two next to the label) still have the seed husks stuck on the first leaves: 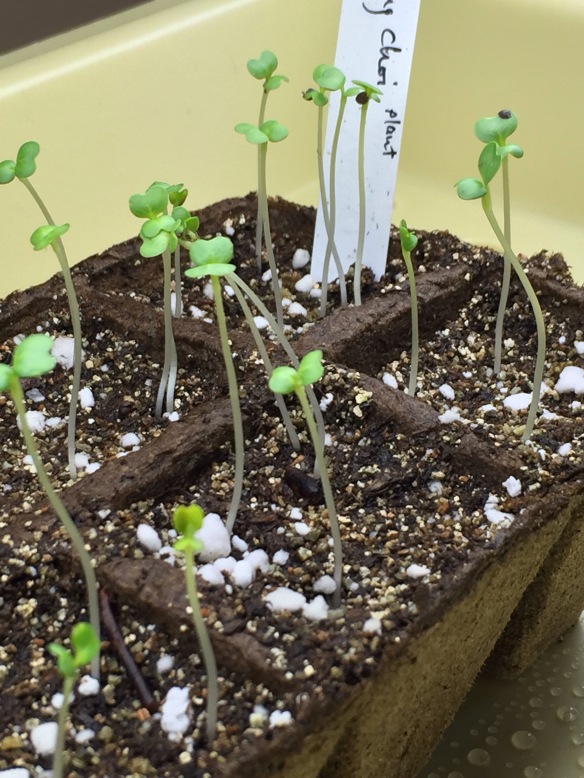 Within a day after 90% had sprouted, I placed them under a fluorescent light and started an initial mist with a liquid fertilizer. The fertilizer is mixed from a seaweed concentrate, SeaCom-PGR, diluted approximately 1:1,000. This concentrate should be rich in cytokinin hormones and deliver a 0-4-4 mix (i.e., no nitrogen but phosphate and potassium), so it should help root growth. 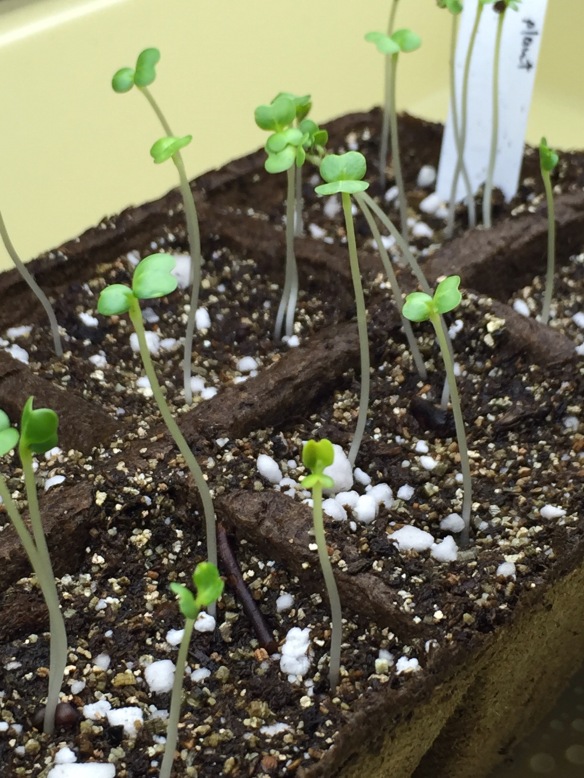 I’m hoping these will be ready to transplant after 4-6 weeks. That will put them in the ground early, but I’m planning to plant in staggered groups about a week apart to  leave some backups if there is a hard frost. And if we’re lucky, that will also get us some early cabbage!

If you’re trying this at home, too, and your seedlings aren’t looking too healthy, they may be afflicted by “damping off,” a complex of fungal disease that can affect germinating seeds and seedlings. More information about that at “How to Prevent Seedling Damping Off.”